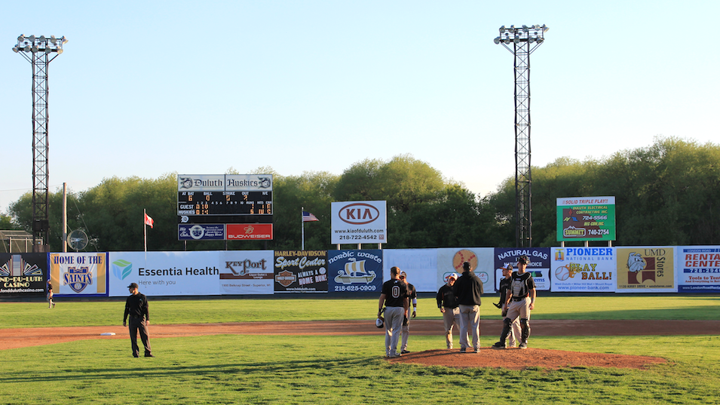 A mid-inning conference by the visiting Eau Claire Express.

This evening the political news is out of Virginia, and there is upcoming news in this space from Mississippi and from San Francisco, both of them tomorrow.

But for now, this is how things looked this evening at Wade Stadium in Duluth, Minnesota—an atmospheric WPA-era not-quite-minor-league baseball field that is home to the Duluth Huskies of the Northwoods League. This is a league for promising players who are still active on college rosters, and thus not eligible for pro contracts of any sort. They get expenses and—according to the lifelong Duluth families we sat among in the stadium—most of the players, who come from around the country, spend the summer boarding with volunteer host families in town. Some of the players join their Northwoods teams late because they’ve been busy in the College World Series and other postseason play.

The home-team Huskies looked strong this evening. They were up 6-1 at the end of the 4th, and came back for 9-7 at the end of the 5th. I asked the native-Duluther sitting next to me, a veteran of the mining industry, whether Northwoods games were generally high-scoring like this, Little League style. He said, No: the Huskies usually didn’t get so many runs. But then the visiting Eau Claire Express scored a depressing 2 runs in the top of the ninth, and sevenin the top of the 11th—and this is how things stand as I write.

This is a placeholder note about America, and also an announcement about an additional theme in our travels-around-America reports. Last month I had the honor of delivering the 14th annual Casey Shearer Memorial Lecture, at Brown University. Casey Shearer was a talented student journalist and writer in the Brown class of 2000 who, tragically and unexpectedly, died of a heart virus while playing basketball with friends just before he was to graduate. Casey Shearer’s influential and popular writings in Brown student media were often about sports and their ramifications; the sports-and-society beat is one he presumably would have pursued as a writer. In his honor, his parents (and our friends) Ruth Goldway and Derek Shearer set up a memorial lecture about some aspect of the journalistic world in which he presumably would have worked.

As part of this year’s Shearer Memorial Lecture, I received, with my wife, a modest honorarium of $1500. We said that in gratitude for this award and in respect for the kind of writing that Casey Shearer might have done we would use the money in the months ahead to pay expenses for reports exploring the role sports plays in the cities we are visiting. I am not making any larger point about the role of the Huskies for the moment, but I am saying that we have applied the $9 cost of our Wade Stadium tickets this evening to this account. (This was half price on “Two-fer Tuesday”). The $18 for beers and brats we are happy to cover ourselves.

Update: the Huskies are coming back with 3 so far in the bottom of the 11th, so it is 16-12 as I write. But my hopes are modest. We actually left the stadium, and have been following online, after the Huskies rallied and seemed back in control by the bottom of the 6th. The truth is, we were freezing. (When flying over Lake Superior yesterday, we didn’t see any icebergs, but most people have mentioned that they were present as recently as Memorial Day.)

We’re not going to be here for Friday night’s game, but in case you are, there’s a special attraction: a group of local women are going to dig their way around the infield with spoons, in search of a hidden diamond. American sports at its finest.

And it looks as if it tonight’s game might end at 16-12. Pitchers’ battle! And there is always tomorrow night, when the Huskies take on the Express again.