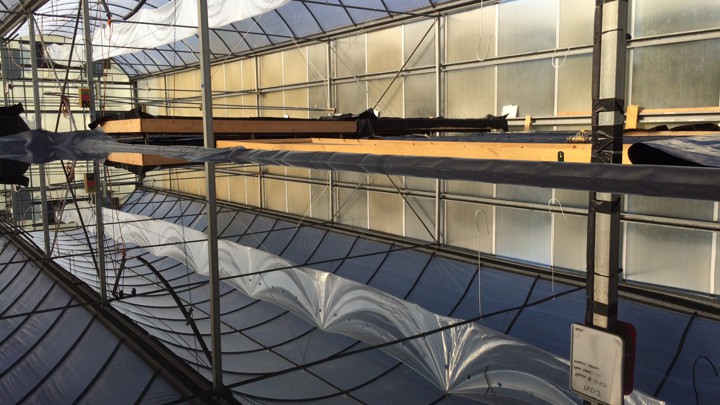 Last night I described our fascinating and surreal trip to a successful “artisan salt” factory outside Charleston, West Virginia. The fascinating part is I hope obvious; the surreal part is that the people running the J. Q. Dickinson Salt Works are letting brine from a half-billion-year-old subterranean sea burble up to the surface, and then gently evaporating it down to its crystalline salt essence. They are doing this at a site where for millennia animals had gathered around salt licks formed where the brine came to the surface.

Bob Coffield, a lawyer and civic enthusiast in Charleston, took us to the salt works and spent more time and care taking pictures than we did during the visit. Here are a few more, for the sake of completeness.

In the photo at the top of the post, you see the austere, Japanese shoji-looking elegance of an evaporating room. I make the Japan allusion both on the merits and because one of the salt works’ commercially important side products is nigari, the Japanese term for very bitter magnesium chloride flakes that among other uses serve as a coagulent in making tofu. The magnesium chloride can be separated from the normal sodium chloride (salt) as the brine evaporates.

Next, harvesting salt crystals from a nearly-fully-evaporated tray of brine. Paige and Lewis Payne, who showed us through the works that Lewis founded with his sister Nancy Bruns, invited us to dip a finger into the still-liquid part of this brew and taste it. If you can imagine the saltiness of a gallon of sea water concentrated into a little viscous drop, you’ve got the idea.

And here, courtesy of Coffield, is a short video of the same process taking place.

Some of the crystals were gem-looking cubes and other interesting 3D structures:

I am sure there is a scientific explanation for the differences in form, but I don’t remember it now.

Another view of one of the big drying rooms, showing Paige Payne on the right and, on the left, Deb Fallows and Lewis Payne.

That’s all for the salt reports, though not all for the Charleston area. Thanks to Coffield and the Paynes for showing us around.