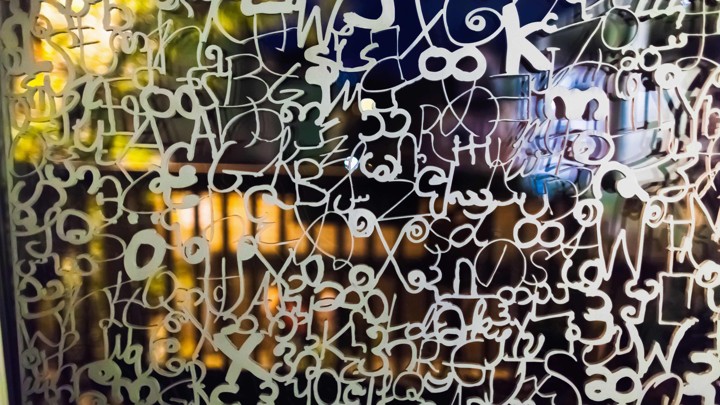 We caught up with our friends at the City of Asylum in Pittsburgh recently, to see what was new in their part of Pittsburgh’s Mexican War Streets, named for battles and generals from the Mexican-American War. The City of Asylum, which we first wrote about here for the American Futures Project, was started by Henry Reese and Diane Samuels as a sanctuary for exiled writers from around the world. They have sponsored writers and artists over the past dozen years, from China, Burma, El Salvador, Iran, Venezuela, Iraq, and they are expecting the arrival of others from Bangladesh and elsewhere.

The programs continue to grow and flourish, and to be embraced by the generous communities in Pittsburgh. The writers have a place to live and work, with a modest stipend that varies with family size, for two years. They return the favor, and then some, to the people of their neighborhood and the city of Pittsburgh in public gatherings and exhibits of all sorts.

Several of the projects that have come out of the City of Asylum have centered around words. As a linguist, I was interested to see what had become of the earlier projects, which were designed to be temporary, and if there were any new ones.

Here is what I have learned:

As a public art installation, the Venezuelan writer and poet Israel Centeno chose 100 words, relevant in some way to Pittsburgh. Neighbors were invited to host a “word in residence,” meaning that they would display a representation of their word, designed by the Venezuelan artists Carolina Arnal and Gisela Romero, on the wall, or door, or window of their houses. River of Words became wildly popular. It was meant to be up for a year or so, but the people who hosted the words became so fond of them that they didn’t want to give them up. As Reese writes:

Intended to be temporary, the neighbors who gave a home to the words asked the artists if they could keep their words and the work became permanent. Initially, this caused a problem with the Historic Review Commission, but the community—the associations and individuals—on their own rallied and negotiated with the commission to keep their words up. During the appeal process, the Allegheny Central Civic Association wrote that “To date, the ‘River of Words’ installation is the best example of public art that has been executed and embraced by the whole North Side community.”

The project has taken on a second life, this time in the form of oral history. Caitlin Bruce, a communications professor at the University of Pittsburgh, interviewed the word owners and recorded their responses.

People reflected, among other things, on how the words came into their lives, how their experience with the words changed their perspective of the neighborhood, and about the impact of public art on the community.

Here is just one selection of Bruce’s interviews, this one with Lynn Kosegi:

Caitlin Bruce: … I wanted to turn now to the River of Words project. Can you tell me what word you have, how you got involved, and kind of what that experience was like?

Lynn Kosegi: Sure. I have two words: “Use” and “Equation.” … “Equation” I think I chose for a couple of reasons. Just because, I’m pretty involved in healthcare, very interested in healthcare delivery, work for a software company, so, you know, mathematics and tech is very big in our minds, and using it to improve healthcare and to improve life for patients and then coming to the War Streets, sort of seeing how the different pieces of this particular neighborhood fit together, and how diverse it is, and how there are such interesting things right down the street like City of Asylum and the Mattress Factory and Randyland. I just kind of thought “Equation” was something that brought everything all together.

Bruce: Great. And so can you tell me what it’s been like having the words on your house? Have any stories come about because of the words? Have you met anyone new?

Kosegi: Oh! I happened to have been home the day that they [the artists] came by to put them [the words] up and a lot of people in the neighborhood, they hadn’t read about it, and particularly my next door neighbor, she came out and was kind of just wondering what was going on and so I told her, and so the artists came over and were talking to her and where she’s been—they were from Venezuela, and she had been there several times, so she asked “Oh, can I have a word too?” so she picked a word too, and then it turned out that some people across the street saw it, and everybody was just asking about, “Well, what are these words,” and here, when they put the word “Equation” up it was actually spelled wrong, so instead of having a “q” it had a “c” and I kind of kept my mouth shut and was thinking, “Oh, maybe that’s how its spelled in Spanish?” I don’t know, but then one of the artists pointed it out, and were like “Oh no!” it was kind of half the Spanish spelling and half the English spelling so they brought back another piece of metal later on to turn the “c” into a “q.” So, it was kind of funny. So that was funny, just the reactions to that, and then the reactions from the neighbors, it was just fun. We were all just standing outside on the sidewalk on a summer’s day and it was just fun. I don’t intend to take them down. I like them.

Bruce: So the last question I have is about public art more generally. Can you tell me what you think the role or the social function of public art is both in the North Side and then in Pittsburgh more broadly?

Kosegi: Oh gosh. I think helping to both create an identity for a community. I think it actually helps to create the community. Especially for a city like Pittsburgh that, I mean, I was a teenager in the ’70s and I can remember when the mills started leaving and when Pittsburgh was really suffering, and I really think the arts and that kind of culture is part of what helped turn this city around and to turn it into the kind of city that ends up on every “Best Something or Other” list that is out there right now, and I think art plays a huge part in that, both in creating the community that we are and in communicating who we are to the rest of the world.

It’s at the corner of Sampsonia Way, where the exiled writers and Henry and Diane all live. It is just around the corner from the Mattress Factory, an avant-garde art museum. The Garden, which was in the planning stages when we first visited, is open and welcoming now.

There are two language features in the garden. One is the alphabet bricks. Over the years, over 1,500 visitors have written out the alphabets, or some character sets, from their native languages. From these records, the artist Laura Jean McLaughlin handcrafted and ornamented 800 different, unique bricks for the garden.

The City of Asylum co-founder and artist Diane Samuels took 800 of the letters and wove them into a fence that runs the length of the garden.

When you enter the gate of the garden, you see the panel pictured below. The phrase on the panel, “Joy is an act of resistance,” is from a poem by the Pittsburgh poet Toi Derricotte. Reese says the phrase was inspired through a conversation he and Diane were having with Derricotte about the Chinese exiled poet Huang Xiang, who has an almost unearthly quality of exuberance, despite the imprisonment and torture he had endured. As Reese once described it to me: Huang didn’t just recite a poem, he danced, shouted, waved, and lived that poem with his entire body and spirit. We had the great good fortune to hear Huang Xiang read—just like that—at the 10th anniversary of the City of Asylum at the end of 2014.

The newest project, underway since last September, is the restoration of the former Masonic Temple into a neighborhood literary center, which will house a restaurant, a bookstore, offices for the City of Asylum, apartments, and spaces for performances, writing workshops, and community gatherings.

Stoop Is a Verb

In a masterpiece of placemaking—drawing in the community to participate in the creation of art—the saxophonist-composer-poet-performance artist Oliver Lake drew on 10 years of his residencies at the City of Asylum. In February 2014, he met with diverse groups residents of Pittsburgh’s North Side, where the City of Asylum is located. The interviewees represented the Fair Housing Coalition, the Mexican War Streets Society, residents and teens at the YMCA, the Young Men and Women’s African Heritage Society community, and more. Their topic was to discuss what it’s like to live on the North Side, answering questions and comments such as:

If the North Side was an animal, what would it be?

Describe the feelings and emotions the North Side evokes in you.

Why did you choose to live or work in the North Side?

What are the key issues dividing the community?

What are the issues that bind the community together?

From those transcripts, Lake drew on phrases to create lyrics for songs he composed. He assembled musicians, dancers, poets, and actors to perform the works. The piece premiered in the City of Asylum tent, free to the public.