I specify more good news (a) in continuity with our American Futures series, and (b) in contrast to the recent final Atlas Shrugged Guy installment.

To explain why I call (b) final: When I got in email range again yesterday, I found an enormous harvest of really interesting responses to the ASG chronicles. Most of them included informed, historically allusive, and well-crafted observations on the politics and psychology of the person involved. And those same messages generally said it would be a mistake to drag this out any further. Real world sample: “Can’t understand why you’re giving the Atlas Shrugged guy so much visibility,” followed by several paragraphs of provocative exegesis.

Agree! Case closed, despite all the illuminating follow-up messages.

Oh, but wait: I need to offer a tip of the hat to reader MM. Solely from clues in the emails I posted, he correctly figured out exactly who the Atlas Shrugged Guy is, where he lives, where his business is located, what it does, how many employees are listed on its 401(k) forms, and how heavily dependent it was on government contracts — which had dwindled since Obama came to office. Nicely done.

Now, back to the good news. I try to avoid using a quasi-public forum to gripe (too often) about customer service, because inevitably you come across as a whiner and borderline bully. Thus I have said nothing about recent encounters with Boingo, or Citibank, and have given other hobby-horses a rest.

But on the principle that you should never miss an opportunity to give a deserved compliment, here is one to the Avidyne corporation, of Lincoln, Mass, which got my wife and me out of a difficult situation yesterday — with the crucial help of Nexair Avionics in Mansfield, Mass.

I’ll save the details, for anyone interested, until after the jump. The summary is that because of a mid-flight equipment problem, we had to land in Portland, Maine, an hour’s flight (and a five-hour drive) short of our intended destination of Eastport. The situation was not in any way dangerous, but it had the potential of being highly inconvenient, since we were due to meet our partners from Marketplace  in Eastport and indeed to provide Kai Ryssdal and his engineer with ferry-flight service.

Two or three times over the years, we have had a similar AOG, or “Aircraft on Ground” situation, which is often a big hassle to correct. The airport where you end up stranded usually doesn’t have the exact part you need. If you’re traveling after working hours or on weekends, you can be out of luck. An equipment problem that occurred late on a Friday afternoon (like this one), far from a service center, could strand you for several days, until parts can be shipped the following week.

Fortunately: I had signed up for the “extended service” warranty plan from Avidyne, maker of the crucial system in question. (Thank you, Steve Inkellis and OpenAir, for that advice!). Under this plan, Avidyne has an after-hours “AOG Help Line” for situations like mine. They scrambled on a Friday evening to find a repair site that (a) had a spare of the part I needed, (b) could be open on a Saturday, and (c) was close enough that I could fly there comfortably and safely with the failed instrument.

Within a few hours they had lined up this site, Nexair Avionics in Mansfield, Mass. Early Saturday morning, we made the short flight to the small Mansfield airport, not far from Foxboro Stadium; and there, within 90 minutes of our arrival, the Nexair director of maintenance, Steve Bonvino, had swapped the defective system for a replacement. That’s him in the picture at the top, standing with my relieved-looking wife. By early afternoon, we had made our way in beautiful weather to Eastport, with this resulting route.

I emphasize the fast response of the “extended service” Avidyne-Nexair system because otherwise the prospect would have been several days of working through Plans B through Z. Seeing the opportunity to give a deserved compliment, I am doing so to Avidyne and its affiliated service centers, and Steve Bonvino and David Fetherston of Nexair.

For the aviation crowd, in-flight details below.

Most aviation tales begin “There I was.” For slight variation: There we were, on Friday afternoon, flying on a blindingly clear-sky day across the northeast, from the DC area to Eastport, Maine.

An hour into the flight, I began noticing one anomaly with a sophisticated part of the Cirrus’s navigation-and-awareness equipment. If you are a Cirrus or Avidyne person and peered at the picture below, you might detect it. It was the tiny yellow “Fail” signal, which I’ve boxed in red. It indicated that the traffic sensor system — letting you know about other planes in the vicinity — had gone bad. 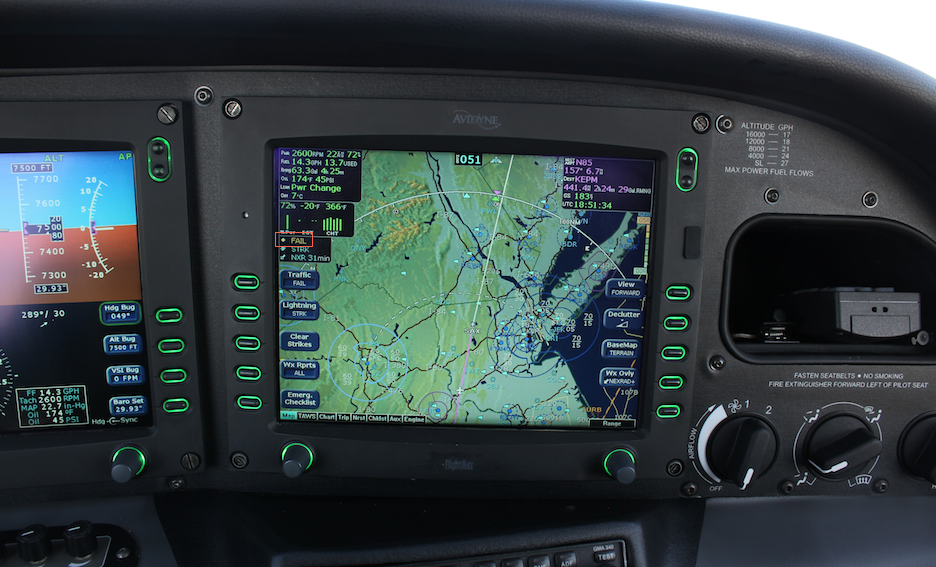 By itself that is no big deal. (Summary of reasons: It was a crystal-clear day, so we were flying under normal VFR “see and avoid” rules. Also, we were on “flight following,” so controllers were seeing us on radar and letting us know about adjoining traffic. And, this particular failure is one that crops up periodically but almost always solves itself the next time you start the plane. And anyway, most small planes don’t even have this traffic sensor.)

Then a few minutes later, I began noticing another oddity. The real-time weather reports — both NEXRAD radar maps of the areas you’re flying through, and station reports of winds, cloud levels, ceiling, and other info for the airports you’re headed to — were not being updated. This in-cockpit weather is very useful because, as shown on the sample shot below (a stock photo, not from our plane), you can get a better idea of where not to fly.

Usually the radar and weather reports refresh every 5 or 6 minutes. I watched them get 60, 70, 80 minutes old. Again, on a clear-sky day, not a big problem in itself, because there really wasn’t any weather to see.

Then … the Avidyne Entegra“Primary Flight Display” for this version of the Cirrus, which you see an edge of in the first cockpit shot, and which in its entirety looks like the stock photo to the right, began flickering out. It was exactly like an old-style TV or computer monitor that was nearing its end. Blank lines flashing across the screen; then the whole thing blinking on and off; then off most of the time, with occasional little flickers back to life.

In itself  even this was not unsafe. Most small planes fly without the benefit of this kind of system; you still have your “steam gauge” backup monitors for airspeed, altitude, attitude-to-the-horizon, climb rate, and so on. Plus, it was a very clear day in which you can judge most of these things (except airspeed and altitude) just with your eyes. Plus, before this project began I’d done lots of recurrent training in how to manage the plane even with most of its advanced systems knocked out.

Still … We were only a few minutes away from an airport with great, big runways (Portland International), in a sizable city, where we had good friends we could impose on. Versus flying an hour further, with equipment that was obviously failing in real time, toward a much smaller city with a smaller airport that had no repair facilities we knew of.

So, we made an unanticipated landing in Portland, an hour short of our expected destination; we threw ourselves on the mercy of our friends, the Cutlers; and then got the answer from Avidyne that evening. Thanks to all involved.