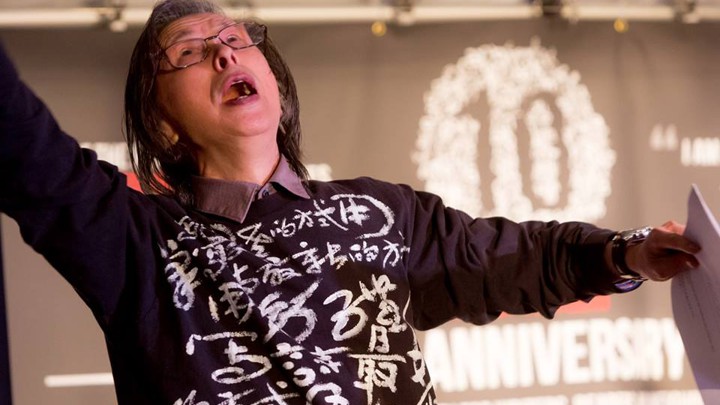 China let go of a bold and brilliant genius when Huang Xiang left the country. But actually, the story is darker than that.

Huang Xiang (sounds like Hwang Shang) was born into a landowning family in China in 1941, eight years before Mao Zedong assumed power. Huang’s father, a general in the nationalist Kuomintang army, was captured by the Communists and executed in 1951. For the sins of this heritage, young Huang was barred from school at age 11. Instead, he stole into the family attic and devoured the books of Chinese masters he discovered there: Lao Tzu, Li Bai, Du Fu, as well as translations of Western equals, the likes of Emerson, Whitman, Lincoln, Freud, Kant. Somehow still a dreamer and free spirit, he began to write poetry.

Huang says that it was a bit of romanticism in the poetry he wrote as a teenager, the innocent-sounding story of a “meeting a shepherd girl, who had come down from a snowy mountain, while singing a song” that earned him his first sentence to prison. That was 1959, and the first of 6 different imprisonments totaling twelve full years between then and 1995. “I lost both freedom of expression and physical freedom because of my dreams,” he says in Chinese.

By 1968, Huang’s poems became darker and wilder. One was in fact called “Wild Beasts”; its translated text is below.

In 1978, Huang and three of his friends traveled from his hometown in Hunan province to Beijing. The Cultural Revolution was over, but in a moment that Huang describes like an epiphany, he felt he must “let the whole world hear his roar.” He painted an image of a huge torch on a wall in Beijing and wrote the character for “Enlightenment.” Then, physically protected by a spontaneous young crowd that had encircled him, he began reciting his powerful poems.
People reacted. The Communist Party reacted. (They sent a plane to fetch his files from his home in Hunan.) It was the beginning of a nationally changing mood and a movement called the Democracy Wall Movement. Huang became, in too-sterile words, an advocate for democracy and human rights. In 1986, Huang was sent to a forced labor camp for 3 years for “disturbing social order.”  In 1997, fearing more imprisonment, he managed to leave China with his wife, Zhang Ling. Through his years of imprisonment she had safeguarded his poems, none of which have ever been published in mainland China. The years of hardship and punishment had cost him broken bones, much of his hearing, and his teeth.

Huang Xiang was granted asylum in the U.S., and that is how he ended up in Pittsburgh, in a place called the City of Asylum, which I first heard about from our friends at ArtPlace America.  There are Cities of Asylum all around the world, founded about 20 years ago to provide sanctuary for exiled at-risk writers. A couple from Pittsburgh, Henry Reese and Diane Samuels, happened to hear Salman Rushdie speak in town. When he happened to mention the Cities of Asylum in Europe, they were interested. To say “interested” is an understatement.

For six years, Reese and Samuels asked the network in Europe to let them create a Pittsburgh City of Asylum. One day they got a call back: yes. The Pittsburgh agreement would be unusual, as other centers were organized with institutional sponsorship, mostly universities. Pittsburgh, as a community, would go it alone. Reese, who had run successful businesses involving coupon books, telemarketing, and call centers, and Samuels, who is a visual artist, pulled together a group of friends and donors to give it a try for two years. They would need to raise money to provide housing, medical benefits, a living stipend for the writer.

They bought a former crack house on a small lane called Sampsonia Way and fixed it up. The lane feels like a Midwest version of a hutong in old Beijing. It sits in the close-in north side section of Pittsburgh known as the Mexican War Streets (with street names from battles and generals from the Mexican American War), a kind of gentrified Bohemian row-house neighborhood with many writers, artists, eclectic personalities and interesting people. Reese and Samuels live there, too.

Huang Xiang and his wife, Zhang Ling, arrived. Then the magic began to happen. No one had any rules for how this was supposed to work, so they all learned from one another.

Huang Xiang was full of ideas and energy. As Reese describes it, Huang was fairly bursting to let loose with all that had been pent up for so many years. Huang didn’t just recite a poem, he danced, shouted, waved, and lived that poem with his entire body and spirit. He was a master of performance.

Reese’s and Samuels’s default was to say yes to everything. When Huang saw Pittsburgh’s Mt. Washington and said he’d like to carve a poem into the mountain, in the tradition of Chinese poets, Samuels didn’t blanch but suggested he might paint his poems on the outside of his house instead. So they set up scaffolding around the frame house and Huang went to work, painting his poems in his own “grass style” calligraphy. He was “writing his house” as they now describe it. People could not help but notice House Poem. Before long, neighbors who didn’t even understand a word of Huang’s Chinese poetry, began to slip notes through the mail slot, with poems they had written themselves.

The aura of being around the City of Asylum is so unusual that I kept going back several days in a row, just to take it all in. For starters, it looked unlike any street I had ever seen, except one: When our children were small, they had a storybook about an eccentric man named Mr. Plumbean, who in a fit of creativity painted his house with an explosion of color and a jungle of wild animals. At first, his neighbors were outraged, but Plumbean said to them:

My house is me and I am it. My house is where I like to be and it looks like all my dreams.

Then, you guessed it, one by one Plumbean’s neighbors began to paint their houses to reflect their dreams. And of course the message spread. Visitors to the street were puzzled, but the people of Plumbean’s street always answered it the same way.

In a simple way, this is the story of Sampsonia Way. Their message has spread all around Pittsburgh, which has embraced it and I would say, even become part of the dreams of the people who live there. The poetry house was followed by other houses designed with text-based art, including the colorful Jazz House and the Pittsburgh-Burma House, which looks very much like Mr. Plumbean’s house!

The City of Asylum programs began to grow and thrive. There were concerts and readings by more than 250 artists, inside Reese’s and Samuels’s living room, and on the streets, and in outdoor tents or on vacant lots. All are free to the public.

Some artists have stayed on to be short-term “artists in residence”. People gave money, and now Pittsburgh’s many and generous foundations give money. There are plans afoot for a neighborhood literary center for more performances, a café, a book store. There is a reading garden under construction, where people can come and sit outside to read in a peaceful place. In the middle of it all is, fittingly, an avant-garde museum called the Mattress Factory. There is a City of Asylum online journal, Sampsonia Way. Their press has published English translations of their five exiled writers.

In another creative venture, the Venezuelan writer and poet Israel Centeno, a City of Asylum writer now, worked on the River of Words, a public art installation within the Mexican War Streets. He chose 100 words, relevant in some way to Pittsburgh. Neighbors were invited to host a “word in residence,” meaning that they would display a representation of their word, designed by Venezuelan artists Carolina Arnal and Gisela Romero, on the wall, or door, or window of their houses. River of Words was wildly popular. “Vortex! I need to have vortex,” claimed one neighbor. “Baseball!” claimed another. “Fear, talent, thought.” The list went on. If you walk the streets around Sampsonia Way, you can spot the words, some bold, some inconspicuous, stenciled on garage doors, or sitting above garden gates.

I finally understood that the City of Asylum is about more than giving an exiled writer a place to live and work. It is about building a community around them that participates with the poetry, or art, or music that is being created in that living space.

Placemaking, as this kind of endeavor came to be called in the 1970s, of the City of Asylum is working in Pittsburgh. On our last night there, we were lucky enough to go to a 10th anniversary celebration of the City of Asylum. The tent was packed with people from all over town. The exiled writer alumni came back to do readings.

Huang Xiang returned from his home in New York for a stellar performance of his work (see first photo), A Promise to Meet in This Life. He flashed the biggest, brightest smile in the world, courtesy a generous Pittsburgh dentist who took two careful years to make Huang’s new teeth. Horacio Castellanos Moya, of El Salvador, performed via Skype from Chile, where he was receiving an award for his fiction writing from president Michelle Bachelet. Burma’s Khet Mar stopped en route from Washington, where she now works for Radio Free Asia, to a month’s visit to Hong Kong. The night inside the tent ended with celebratory cakes and audacious sparklers, a fitting launch for the next ten years of Pittsburgh’s City of Asylum.

Here is the list of the writers in exile who have spent time at Pittsburgh’s City of Asylum:

This age viciously seizes me
With squinting eyes
Its feet stomp on the bridge of my nose
Tearing
Biting
Gnawing
Gnawing until barely a bone of me is left.

Even though barely a bone is left
I want this detestable age to choke on me.