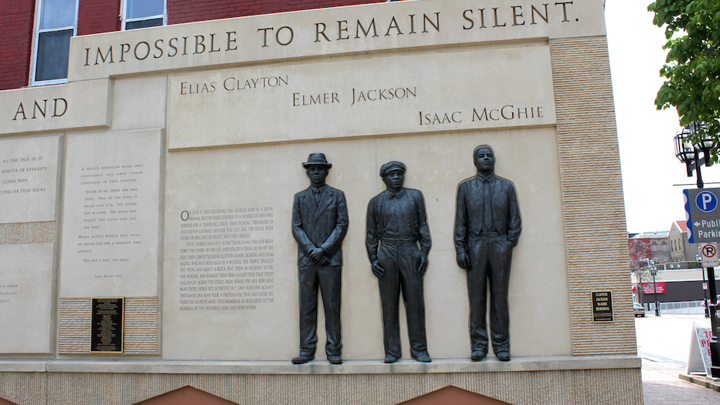 Monument to the three victims of a lynch mob, in downtown Duluth.

The real importance of Ta-Nehisi Coates’s Reparations article, which is still attracting deserved attention, is that it is not mainly about repayment in a literal, financial sense. Instead, as I understand it, it’s about a larger historical reckoning or awareness. “Truth and reconciliation,” you might call it.

By analogy: Whether or not Germany had ever made monetary restitution to Israel or to other victims of the Nazi era, to know anything about modern Germany is to recognize that it has attempted to face its past. In contrast, to know anything about modern Japan or China is to recognize their difficulties in facing episodes from their 20th century past, mainly of the ’30s and ’40s in Japan’s case, and the ’50s through mid-’70s in China’s.

The importance of recognition is why I was so struck by the monument (shown above) in downtown Duluth, Minnesota, to the three victims of a famous lynching there 94 years ago this month, in June 1920. A traveling circus had visited town; a local white young woman was allegedly raped; six young black men were rounded up and taken to jail. Then a mob of many thousands of white people stormed the jail, seized the black men, “tried” them on the spot, and convicted three. Those three men—Elias Clayton, Elmer Jackson, and Isaac McGhie—were hanged that evening from a lamppost in the center of town, while the police did virtually nothing to interfere.

A history of the episode, The Lynchings in Duluth by local author Michael Fedo, includes a photo of the murdered black men, two still strung up and one’s body lying on the street, as a rapt white crowd looks on. That photo was made into a popular postcard, and a cropped version of it, minus the bodies, is the cover of Fedo’s book, as shown below with a related work. The full-frame photo of the lynching is too gruesome to include here—but again, in keeping with Ta-Nehisi’s theme, it’s important to note that there was a time when people bought it and sent it through the mail. This happened more often in the South than elsewhere, but it was an American rather than a Southern evil.

In another book of essays about his growing-up in Duluth, Zenith City, Michael Fedo (whom we happened to hear speak in Duluth earlier this month) describes the region’s long, willed suppression of all mention or memory of the lynching, which naturally made me think of the forced-forgetting of Tiananmen Square in China. He had barely heard of it as a child but stumbled upon a reference to it in the 1970s, and wrote his history, which was originally called They Was Just Niggers, after a remark by someone in the lynch mob.

In 2000 a local group began a movement to commemorate the episode. Three years later, the dramatic public-art memorial shown in the photo at top was dedicated at the very site of the lynching. It has full-sized bronze renderings of the three men, unsparing descriptions of the violence, and a large quote from Edmund Burke: “An event has happened upon which it is difficult to speak and impossible to remain silent.”

The monument is in a still-rough area of Duluth’s unevenly improving downtown. Here is the scene directly across the street, looking from the memorial plaza toward the Paul Robeson ballroom and the site where the three men were hanged.

Still the monument is there, barely one minute’s walk from the main-drag Superior Street. I can’t confirm what I heard from several people in Duluth: that this is the only such monument of its type in America, or at least the most detailed and personalized about its victims. (For a somewhat skeptical perspective on the monument from a Duluther, see this on NPR a few years ago.) But it’s different from, and more un-ignorable than, anything I’ve seen elsewhere, whether in the deep South or in some of the Midwestern states where the Klan flourished in the 1920s. It is in the spirit of the reparation of which Ta-Nehisi writes.

Duluth is a city I’ve long enjoyed and admired, and in upcoming dispatches my wife Deb and I will go into some of the business-and-technology reasons to pay attention to it now. (Plus, it just won the meaningless-but-interesting Outside magazine 2014 poll on overall best place to live, edging out Asheville, N.C. in the semifinals and Provo, Utah in the finals.) For the moment I’m concentrating on its role in “reparations,” and the surprising step this far-Northern, always overwhelmingly white city decided to take.

With that prelude, let’s dig back into the mailbox on the “Endless Civil War” theme, especially in the wake of the narrow but welcome defeat of neo-Confederate candidate Chris McDaniel in Mississippi. Say what you will about why Sen. Thad Cochran felt that he had to appeal to black voters, the plain fact of his doing so is a plus. Much of what we have reported from the “Golden Triangle” of Mississippi has also been on-balance positive about the state, for instance here, here, here, and here. Readers agreed and disagreed here and here and here.

In our previous installment, I quoted a Jackson-area attorney, Zachary Bonner, on how tired everyone in Mississippi was of being treated as a specimen of America at its most benighted and, well, Faulknerian. He specifically complained about a CNN “Parts Unknown” feature on the state by Anthony Bourdain. Now some reader response to his views.

“Disappointed.” From a reader in Philadelphia:

I have to say I’m a little disappointed in your giving so much valuable blog space to someone like Bonner.

I’ll take the multicultural take of Bourdain, PyInfamous, Stacey Winters, Geno Lee, Willie Seaberry and Willie Simmons every day and twice on Sunday over that of a privileged-for-life white dude with a JD who works for a suit and tie law firm and lives in the lily-white enclave of Ridgeland.  A law firm, I might note, that contains not a single woman or person of color, but plenty of names like [a classic Southern name, ending in III].  So much for the lip service to “it doesn’t matter if the man is black or white”.

Rich white dudes like Bonner and his law firm buddies have been speaking about and controlling the narrative of Mississippi for 400 years.  We don’t need another one telling us how Bourdain got it wrong and we certainly don’t need him speaking for Geno Lee.

“Whites in Mississippi won’t help blacks.” On a parallel theme, from a reader in Texas:

About seven years ago I attended a conference of Catholic charities that had received funds from [a large] Catholic foundation. The purpose of the conference was to train the attendees in good corporate governance and financial sustainability because the foundation’s grants only lasted three years and would not be renewed.

One of the nonprofits attending was one founded by a Jesuit in, I believe, northern Mississippi.  That agency served poor rural African Americans.

At lunch after a fundraising presentation the ED of the Mississippi agency expressed frustration and concern to our table at the inapplicability of the recent training to their situation.  Fresh from the training and full of hope among like-minded folk we offered thoughtful suggestions.

The ED just shook her head and said something to this effect:

In Mississippi white people do not give to nonprofits that serve African Americans.

“At least some hope for a better future.” Ronald Parlato, who now lives in DC, writes:

I’ve been reading your articles about Columbus and the Golden Triangle of Mississippi with great interest.

I am a Connecticut Yankee, longtime resident of DC, but Columbus is my second home.  I have been traveling through the Deep South and especially Mississippi for years.  As many have said before me, “You cannot understand American history without understanding the South”, and through my many visits I feel I have at least begun to understand what the South was and is.

When I first told my Northern liberal friends that my wife and I were going to Mississippi for vacation, I got more than the usual quizzical stares.  “You shouldn’t do that”, they said.  I was going into the maw of the beast and my visits legitimized an eternally racist, ignorant, and backward society. I was, in other words, a traitor.

My wife was told to remove the cotton plant from her desk at the office because it was racist and oppressive, a reminder of the chains of slavery.

Photographs of meticulously restored antebellum houses were off-limits. How could I have stayed in those symbols of a brutal Southern past?

The more I stayed in those wonderful houses, of course, the more I learned.

In one, I read the plantation logs and journals of the original owner.  What I had read in Time on the Cross (the economics of slavery) became real, immediate, and instructional.  I could see what this particular slave owner had spent on his slaves (food, shelter, clothes, health care, etc.) and what was his return.

Along the way I stopped in eateries, antique stores, gas stations, police stations, and fire houses.  People were always willing to talk, and old folk went on and on about the way it was.  I didn’t bring up civil rights, nor did they, and as a result I heard about the regular, ordinary life of small Southern towns.

Southerners themselves say that they have an inferiority complex and are very welcoming to Northerners who seem to take a genuine, non-judgmental interest in their lives and their history.

On more than one occasion, I would be asked by a curious passers-by in out-of-the way places in Mississippi, “What on earth are you doing here?”. In other words, why would a Northerner, of all people, voluntarily visit the South.  Northerners, when hearing of my sojourns in Mississippi were no different and would always ask, “Do you have family there?” – the only possible reason for visiting such a benighted place.

After these many years and a lot of Southern history (if you haven’t already, I would suggest Eric Foner’s work on Reconstruction, the best of the lot [JF note: Yes, I have, and agree]),  I have begun to understand Southern resentment, conservative politics, and the cultural distinctness of the region.

Not only is Mississippi on the bottom of the all socio-economic indicators, is is the most fundamentalist of any state.  Dismissal of evolution and acceptance of the Bible as the literal word of God are common.

Conservative politics are easier to understand if observed through this lens.

I return to Columbus every year for at least two months, and I am now on the board of the fledgling Tennessee Williams Foundation.  [JF note: Williams was born in downtown Columbus, and his birth house is now a museum.] I have taught literature at Mississippi University for Women, helped produce the yearly performances of Williams by the Tennessee Williams Tribute, and write for a local paper.

Most importantly I have made many friends – many I would never have met back home.  I keep intending to write the stories of many of my local heroes who despite everything – poverty, prison, backwoods upbringing – keep working and working hard. Their refusal to take ‘government handouts’ is not political, but personal.

I have been looking for [Mississippi] success stories for years and maybe with Severstal, Yokahama, the Air Force Base, the W, Eastern Mississippi Community College, and Tennessee Williams there is at least some hope for a better future.  I have seen too many Mississippi towns die a sorry death, and I want Columbus to thrive.