Because I’m not a politician, I don’t have to wear an American-flag lapel pin. (I’ve never seen a photo of, say, Dwight Eisenhower, or FDR, or JFK, wearing a flag pin. Richard Nixon did it occasionally, in the Vietnam War era. It became de rigueur for public figures some time after the 9/11 attacks of 2001.)

But this is the story of a pin I’ve started wearing recently. The pin says report for america, as you can see below. You could read those three words as an imperative-mood reminder of what people in the journalism business are supposed to do (at least the Americans). They also represent a promising movement, in discouraging times.

The fate of local news looms very large in the fate of smaller-town America:

Independent local publications are of such tangible importance that (according to a much-noted academic study last year), bond ratings go down, and the cost of issuing bonds goes up, for cities or counties that don’t have viable local newspapers.

Yet nearly every place we’ve gone, we’ve heard about the economic pressures on local newspapers, websites, and other publications as being even worse than those weighing down the press as a whole.

Which brings us to: Report for America. Earlier this month, in Houston, Deb and I met the 60-plus young men and women whose photos you see at the top of this item. They’re part of the second “corps” of Report for America members headed to newspapers, broadcast stations, or other news sites mainly in rural or small-town America, where they will add coverage on issues that will shape those communities’ futures.

The Report for America project is part Peace Corps, part Teach for America, part something entirely new. No one innovation or source will in itself be the answer to local journalism’s crisis. But a lot of experimental approaches might add up to an overall answer—and Report for America has the potential to be an important part of that solution. (For the record: Deb and I have no connection with RFA except being given the lapel pin and some RFA-branded reporter notebooks when we spoke at the training session in Houston, plus having known its co-founder, Steven Waldman, for many years.)

What’s the Report for America concept? It is—from my perspective—a shrewd combination of short- and long-term incentives and ideas.

The Report for America story began roughly three years ago. Before then, a former Boston Globe reporter and editor named Charles Sennott had set up The GroundTruth Project, which was designed to foster a new generation of innovative reporters in the United States and around the world. Sennott had also worked for the New York Daily News and PBS, and had founded an international reporting site called GlobalPost.

Not long after the 2016 election, Sennott approached a writer and entrepreneur named Steven Waldman about a possible collaboration. Waldman had been a Newsweek correspondent, and was national editor of U.S. News & World Reportwhile I was the editor there. He also had written a wonderful short book called The Bill, about the tangled legislative history of creating AmeriCorps in the 1990s; had founded an influential faith-based site called Beliefnet; and during the Obama administration had written a report for the FCC about the impending crisis in local-news coverage.

After the FCC work, Waldman had begun thinking about new ways of supporting local journalists and journalism. In the summer of 2015, he published a paper in Medum called “Report for America.” The subhead was, “A new model for saving local journalism, borrowing from national and community service programs.” He also discussed this idea in an article for the Columbia Journalism Review.

Sennott had heard about these ideas and knew of Waldman through mutual friends. After the 20216 elections, he called Waldman to discuss the possibility of developing Report for America as part of the GroundTruth organization. They began raising money, initially from (among other sources) the Galloway Family Foundation and from Google’s News Lab, and last year they selected and trained a corps of 13 reporters, destined for local news rooms.

What’s distinctive about the Report for America approach? First, its funding model. The total investment for each RFA corps member—being sent to West Virginia, to Wyoming, to the Central Valley of California, wherever—averages about $40,000 a year. Philanthropists: If you’re thinking about how your money can really have impact, reflect upon that number.

RFA provides about half that money itself. Of the remaining share, half is supposed to come from the news organization that the reporter will be working for, and half from local philanthropic sources in  that community.

Waldman told me this week that the multi-source funding model drew from the experience he had when working for a year at the fledgling AmeriCorps, under its then-director Harris Wofford.

“AmeriCorps had a matching system, where local nonprofit programs were supposed to put in money, in addition to the money the national program was sending them,” he told me. “For RFA, this struck me as an important way to hit our ultimate goal of a thousand reporters, and also to make the program sustainable.”

A bad result for RFA, he said, would be if “we created a great program for someone [the young reporter] for two years—and then they go away, and everything goes back to the way it was before. I thought that if we wanted to transform local media ecologies, we had to lure out local philanthropic money. And of course we also had to ask for the local-newsroom share, to ensure quality. The surefire way of making the quality of the experience horrible would be to give newsrooms ‘free’ reporters.”

Also worth noting: the Report for America mission. Despite the naming-similarity to Teach for America, RFA struck me as being a fundamentally different operation. TFA took people mainly right out of college, and hoped to interest them in the world of teaching. Most of the RFA corps members have already spent a few years as reporters—so they are older, and better prepared for the newsrooms they’re headed toward. And, according to Waldman, Report for America has a more explicit goal of shaping the environments of the cities where its corps members work.

“We view this as a ‘helping communities’ program, more than a ‘helping journalists’ program,” he told me. “Sure, we want to do everything to make it the best possible experience for the journalists. But helping them is a means to an end. The end is that local communities can hold authorities accountable, improve their schools, have clean drinking water. And if there are secondary benefits to the reporter—as with the Peace Corps, the excitement of being part of something bigger—then that is great as well.”

There was, though, a significant point of similarity with Teach for America, Waldman said. “One thing they did well was creating this sense that being a teacher was a noble and worthwhile goal,” he said. “We hope to do the same thing with the nobility and worth of being a local reporter, with the emphasis on local. And we’d like to revive this spirit that being a journalist is a public-service job.”

You can read the stories of the 2019 RFA corps members we met in Houston here. They are headed all over the country: Several to tribal areas. Several to Puerto Rico. Several each to Appalachia and Mississippi and the Central Valley of California. Others to smaller cities on the East Coast. Most are women. Well over one-third are nonwhite.

We spoke with them and, while hearing their questions, were impressed by their combination of passion and realism. How would they arrange time off from their newsroom jobs for the several hours a week of local public-service activities that were part of their contracted obligation? How should they take part in local civic and religious organizations? When would they feel they knew “enough” about a new setting to begin expressing any judgments about it? What would it be like, living in this new little town? 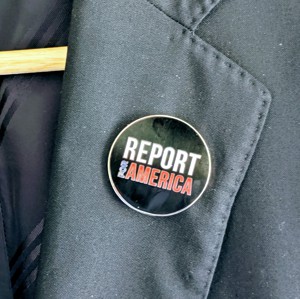 Their RFA mentors gave them advice. The corps members understood that things would look different when they were actually on the job. Some concerns they were worried about ahead-of-time would melt away. Others they hadn’t thought of yet would emerge.

“Community journalism won’t survive if the community doesn’t support it,” Steven Waldman told me this week. “We hope to build a broader definition of what that means. And the best way to restore ‘trust in journalism’ would be for people to see lots of reporters on the ground—at the local school-board meeting, writing about dirty water, being part of the community.”

To the 61 members of the latest Report for America corps, and to all supporting the effort, I say: Godspeed. I’m wearing my pin.