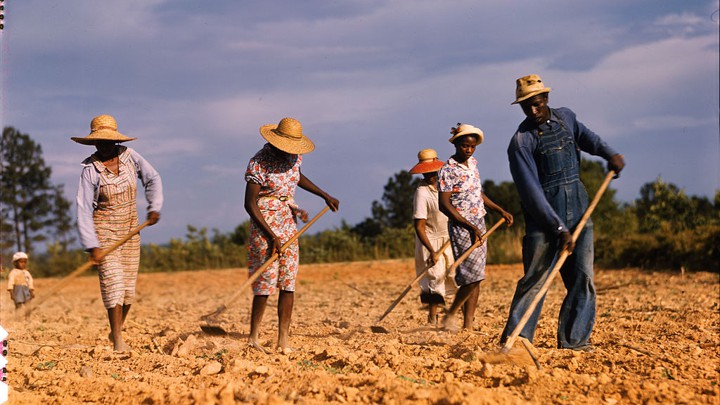 Sharecroppers in Georgia, just before World War II. Are their grandchildren better off, because industries have arrived? Hint: my answer is Yes. (Farm Security Administration, 1941)

Question for the day, from readers: whether any success it achieves will necessarily come at the expense of other places, especially in the North. Of course movement in rankings is by definition zero-sum. The real question is whether greater prosperity for Mississippi has to mean less somewhere else.

For background, here are some installments about the Mississippi educational efforts: one,  two, three, and four. (No matter what region you’re from, be sure to read at least the first couple of essays by students in that final, fourth item.) And these on industrialization: one, two, three, and four.

Now, a note representative of several I’ve received. It concerns how to think or talk about economic activities in the non-union, low-wage, politically conservative, ever-shadowed-by-racial-injustice (cf. Ta-Nehisi Coates) areas of the Deep South. Here goes, quoted in full for context:

I have an odd relationship with your blog. I read it avidly and yet I find myself alienated. You prick my despair about the country, in fact. In your most recent entry in the ‘Lo and Behold, Industry in Mississippi’ series, you asked for feedback and so here is a little exploration of my vexed relation to your work and perspectives.

First off, I’m a native of a Rust Belt city and much of my family originally migrated here from the South. In fact they were slaveowners who left the South to industrialize the North – and they were very successful at it, probably even a factor in the victory of the North over the South in the Civil War.

But I grew up in a different time – the time of decline of industry. I grew up with the decades of desolation and loss. I understand the impact of abandonment, wholesale and profound, that has infected the Rust Belt in the post war era. I know the economic decline of Rust Belt cities to be deeply imprinted with American racism as well as the relentless and devastatingly effective rightwing campaign against unionization. The deindustrialization of the North cannot be separated from the success of Southern style politics and ideologies over the last 40 years. The American people have suffered serious economic harm as a result.

So forgive me if Joe Max Higgins does not seem charming. To be honest my chief reaction to reading this piece was to wish that TVA funding was quickly and permanently yanked. I do not support federal funds in order to develop this political cesspool into an influential center of the American economy. I think the South should be quarantined, politically and economically. They suck on the federal tit whilst fanning resentment of the poor, among many (many!) other political sins.  (The best thing about the Dixiecrats is that there were less effective nationally when stranded within the Democratic Party than they are today, when they control Republican ideology and the Supreme Court. )

I wasn’t satisfied by your reply to this comment [from another reader, a man in New York]:

“The theme that I find missing in your series is any recognition that the Southern states have been in a continuing economic war with the Northern manufacturing base for at least since the Civil Rights Act. Undermining and destroying unions has been a signature part of that strategy and it has been very successful. The great cities of the North have been hollowed out just as they were beginning to provide a haven for lower class families, not to mention the overall starvation of the middle class.”

You didn’t address the above point. The South has had a baleful influence. Perhaps what is in process is the lasting destruction of American broad based prosperity, thanks in no small part to rise of Southern political values. There are no signs of a turnaround for most in this economy – it is only getting worse. Yet continuing on this path would be tragic. It would fundamentally undermine the whole American experiment. I would like your series a lot more if you addressed this.

I keep telling myself I won’t do this any more, but I wrote right back to the woman who sent the message:

I have a reaction of “And therefore, what….?” to your views.

Suppose one, like me, is in favor of unions, is in favor of more progressive taxation and a fairer economy, is against what many Southern politicians now stand for, has written endlessly about the “new nullification” menace, and so on. Should I say: “Well, I hope these people in Mississippi stay poor?”

I’d be interested to know what, specifically, you’d like to do to, or with, Mississippi—or St Marys, Georgia, or Greenville, SC—as the action part of your view.

To which she replied:

As to your question – should the people in Mississippi stay poor? I would suggest taking a serious look at the answer ‘yes’. If industrial jobs in Mississippi are in fact a part of a national race to the bottom and if that race is destructive to the larger good then the race itself should be stopped. And one consequence of that could be a slow down in the industrializing of Mississippi.

I don’t enjoy making careless arguments and there are a number of ‘ifs’ in the above paragraph. The point is that there is a larger picture. What conventions, regulations, and laws enable corporations to make states compete against each other for their investment? Some of that should simply be outlawed. Some of that sort of thing is actually disallowed under trade pacts – why should it be allowed for states?

It’s taken decades to build an economy of downward mobility. Financial deregulation, corporate trade deals, and union busting has required not only policies but ideology and economic theory. It has been a bipartisan effort and academics and the media have contributed. Virtually all of the conventional thinking in my view is tainted by this history. But the issues we are discussing impact the real economy of jobs and wages. We must not avoid painful disputes even though bringing up these difficult issues is a downer in the context of a feel good story of a poor corner of the country doing better.

If you’ve gotten this far, I hope you’ll indulge a further word about the ongoing juggling act for a writer like me. Over the past three-plus decades, in at least four of my books and at least a dozen long Atlantic articles, I’ve tried my best to apply reporting, reading, thinking, and observation to questions of exactly this sort. The movements of industries among nations; the movements from region to region within a nation; the forces that make whole economies seem to progress or stagnate; the forces that are uniquely necessary if America is to seem “fair”; the burdens of history, race, public policy, and private institutions in shaping American mobility, and so on.

I know that I’ve written all this stuff. Most readers, probably including this one, don’t. But if I say, “go read ‘How the World Works‘ or More Like Us or ‘How America Can Rise Again,'” I sound insufferable. And if I don’t, I’m left with people who “are not satisfied” because I haven’t dealt with a topic at a time when they happened to be noticing or in a post they’re seeing on its own. As the world’s problems go, it’s small. But it is one I have to think about it.

Enough about me! Let’s turn now to a reader in Florida. He writes:

I agree with you —I wouldn’t lead every Mississippi piece I wrote with a racial disclaimer either. After all, TNC’s writing has focused as much on Chicago as Mississippi—which makes sense because parts of Chicago are historically, literally Mississippi north.

That said, two things about two of these posts really struck me and both relate to the historical relationship of Missisippi and Chicago. Key quote from your post:

“Part of the ‘Northern narrative’ on what we’re doing here is that we’re just buying industries,” [Joe Max Higgins] told me.

Southern government and industry (mostly agriculture) fought with every legal and extra legal tool it had to halt the migration. “The southern narrative was you will cripple our society by stealing our niggers.” It was routine for southern local governments to ban labor recruiting; to ban migration itself through brutally enforced vagrancy laws. My hometown in Florida passed an ordinance in 1916 requiring a $1,000 license for any recruiter seeking black labor. Not getting the license was a crime.

No, they don’t. They know about water fountains and epithets. They know nothing about the migration that made both redlining and the successful civil right movement possible by breaking up the status quo.

In my opinion, WWI and the Great Migration are the two most important forces of 20th century. One caused the other. They are, I think, without question the most important racial forces of the 20th century. And we as a country know nothing about them. We know so little about them that an economic developer in Mississippi doesn’t see the exquisite historical irony in the South “buying” the industry that the north used to buy its labor and grow the industrial power of the US.

This is plenty to chew on for now. I was tempted to add a “This I Believe!” summary of my economic views, but I am going to save that for tomorrow. I have actually written it already, so I will actually post it after I let it cool.

I will though close with one transition point, tied to the first reader’s note. I respect her clarity in following her logic to its conclusion. Still, I completely  disagree that the rest of the country might have stayed richer and fairer if our poorest state stayed dirt poor. While I’m at it: I also don’t think America would be richer, fairer, or happier if China were still dirt poor. That’s a topic-sentence assertion for now. Supporting sentences soon.

ECONOMIC & BUSINESS DEVELOPMENTFROM THE READERS
BACK