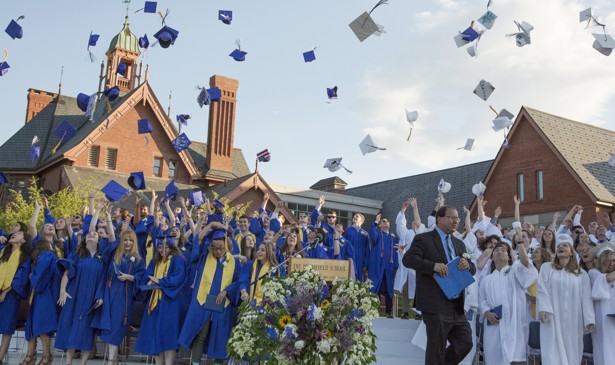 “Traditionally, white gowns were for girls, blue for boys,” Worth Robbins said of Harvard’s high-school-graduation ceremony, pictured here in 2016. “For the past six years, seniors have voted to have the gowns distributed randomly. This year the seniors voted to have only blue gowns, a symbol of their propensity for knocking down differences and announcing themselves as a class of innovators and activists.” Lisa Aciukewicz / The Harvard Press

Do local public-radio stations play an important role? In big cities, from Boston and Washington to San Francisco and L.A.? In small towns, like those across Mississippi or Alaska or Maine? Do they matter in the South as well as the North? In inland states as well as those on the coast?

All the evidence I’m aware of, anecdotal and statistical, suggests that in every one of these places, the answer is a clear and obvious yes. Public radio matters; it matters all the more in remote and rural areas farther from other news outlets; and it is seen as mattering in a way that transcends normal regional or political dividing lines.

But suppose those public-radio hosts, programs, and stations were judged not by their broadest social, civic, and cultural effects but instead by the narrowest financial measures. How many would pass muster if they were held as part of a private-equity fund’s portfolio, in which each program or local station stayed in operation only as long as its return-on-equity matched that of some alternative investment, from a big construction project or a biotech start-up firm?

In those circumstances, virtually none of the stations could exist. Nor would any library. Or public park. Or museum. Or zoo. Or virtually any educational institution except for the shadiest diploma-mills. Or any of the other aspects of social life whose “returns” may be enormous but are not captured in one investor’s profit-and-loss sheets.

That’s a way of understanding the predicament of local newspapers, in a private-equity age. And it’s a reminder that a specific business model and a broader public interest can be fundamentally at odds.

Obviously small-town papers face a hyperintense version of the pressures affecting the news business as a whole. But previously in this series, we’ve discussed local papers that are for now defying the harsh economic trends—in Mississippi, in Maine, in Massachusetts, aspirationally in Southern California, and in points beyond. More reports are ahead—from Tennessee, from Michigan, from Northern California, and elsewhere.

The central message in all these reports has been that ownership structure matters. If papers are owned by private-equity-based firms, of which the most familiar examples are the MediaNews Group (better known by the trade name Digital First Media) and GateHouse Media, the prospects for community news are grim. The chains are in the news business as “just another business,” and their coast-to-coast track record is of squeezing the reporting and editing budget until there is nothing left that subscribers would want to pay for. But in the same market where a private-equity-owned paper would be doomed, some family- or community-owned papers have shown that they can make “enough” money to keep providing the news.

This brings us to the little Massachusetts town of Harvard, about 30 miles northwest of Harvard University, in Cambridge, but with no connection to it. It is the latest arena of attempts to create a paper that can be sustainable, on a non-private-equity business model.

Around 6,000 people now live in Harvard, Massachusetts (which I feel compelled to keep identifying that way, to avoid confusion with the “other” place). In the mid-1800s, it was a haven for transcendentalists, Shakers, and other spiritually minded New England Utopians. One of its current tourist attractions is its Fruitlands Museum, which tells the story of some of these groups. In modern times, Harvard’s main business has been farming, especially apple growing, plus spillover from nearby Fort Devens, until it began shutting down as part of the base-closing movement of the 1990s. It also now serves as a bedroom community, within reasonable commuting range of Cambridge and Boston. 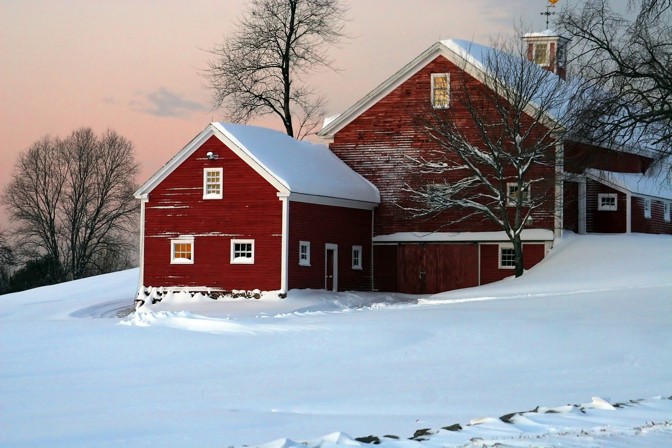 The Fruitlands Museum in winter (Lisa Aciukewicz / The Harvard Press)

Starting in the early 1970s, Harvard, Mass., had a local paper called The Harvard Post, founded by, among others, a civic activist and news entrepreneur named Ed Miller, then in his 20s. This is the same Ed Miller who, now in his early 70s, just founded a local weekly for Cape Cod, as I described last month. In 1978, Miller, his Post co-founder Kathleen Cushman, and Lawrence Anderson wrote a how-to book on the art and science of successfully running small papers.

After the Post served Harvard, Mass., for 30 years as a locally owned community newspaper, it was unexpectedly sold in 2003 to a chain called Community Newspaper Company, or CNC. For a little while, CNC kept the paper’s journalistic and civic role mostly intact. But soon the cutbacks began, the local coverage thinned out, and local readership waned. The paper’s office was moved out of town to a regional center; CNC itself became part of GateHouse; and by 2013, long after it had ceased to be a significant part of local affairs, The Harvard Post officially shut down.

As their existing paper caved in—really, as it was dismantled by design—four local residents decided to take matters into their own hands, and to start a paper to play the part that the Post had in its pre-chain days. One of the four, Worth Robbins, explained on the website of the new paper, The Harvard Press, what happened next. The chain-owned Post, he said, “stopped being a local paper, by and for Harvard residents.” And in response:

The Harvard Press was born when four Harvard residents decided to band together to produce a high-quality, locally owned newspaper, like the town once had.

In early October 2006, we put finishing touches on a rudimentary business plan with assumptions about subscriptions and advertising (the two sources of revenue for any newspaper), and cost estimates for equipment, printing, and distribution. We would operate initially in the home of one of the partners … The owners/partners would take token compensation for the first year. The business plan projected a first-year deficit in the range of $50,000 to $100,000; we would need financial help to make it happen.

We decided not to organize as a nonprofit, because of inherent constraints. We wanted the paper to be fully independent, free to engage with the town without restriction; therefore support contributions would not be tax-deductible, nor would they confer any special privileges or influence.

We expected it would take several months to attract contributions to enable us to get started, and initial plans called for a January 2007 launch. We were fortunate, however, to receive significant support from a small number of longtime residents, who shared our belief that Harvard needed a good local newspaper. Less than a week after we began looking for help, we had received commitments for enough money to begin, and we set November 17, 2006 as the target for the first issue—less than six weeks away!

What’s happened since then is chronicled in a large number of update posts, mainly by Worth Robbins, collected in the “Economics of Local News” series at The Harvard Press‘s main website. It’s also analyzed in an article in the Yale journal The Politic, by Lily Moore-Eissenberg, who grew up in Harvard, Mass., and was a high-school reporter for the Press before going to college at Yale.

The short version of these accounts is: The Press has operated on a shoestring, with borrowed and donated equipment and low-paid or volunteer labor; it has steadily increased its role and presence in the town, now with paid distribution to over two-thirds of the town’s households; and having operated it for more than a dozen years, its owners are now considering how to make it viable for the long haul.

“Most of us who started the paper and are still here are in our 70s,” Worth Robbins told me when I spoke with him on the phone last month. “We’re doing it for love of community. We’re not going to keep doing this forever. People are being paid, but not a lot. So we want not only to put the paper on a sound financial footing—and be prepared to pay more meaningful salaries to attract younger people to work here.” 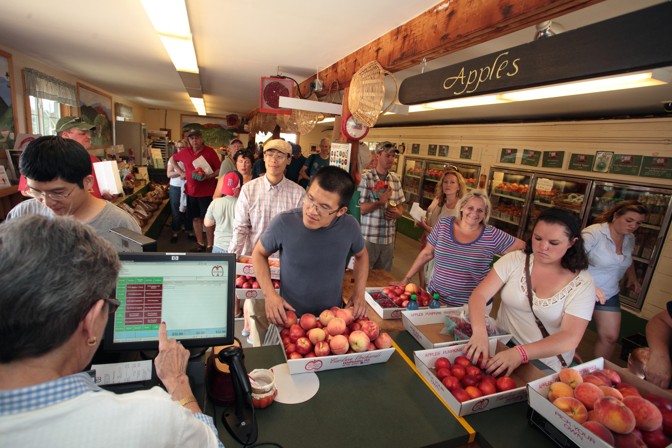 Robbins said that the paper’s staff had made a point of including and training students and young people from the community. But he and his colleagues realized that to entice any young resident to return, the paper would need a different business basis. And so they were trying to move from just enough community funding to survive to a large enough budget to allow the paper to grow.

“Three years ago, I put a story in the paper saying, ‘We’re getting low on funds, we could use some help,'” he told me. “One person wrote in saying, ‘I love the paper, and I’ll put in $5,000 to match $100 donations from other people.'” That campaign led to about $12,000 in total donations. “Then we came up with this idea of ‘sustaining subscribers,'” he told me. “People who would pay $100 per year, rather than $30 or $40—and if they could pay for five years, at $500, in advance, please do so!” Since the beginning of the sustaining-subscriber campaign, the paper has gotten about 240 people to support at that level, “and 40 of them for five years!” he told me.

I asked Robbins—who grew up in Kentucky and came to Harvard, Mass., in the 1970s for a tech career—what difference it had made to his community when it lost its paper, and as one has reemerged. “The town was so damaged by the loss of the Post,” he told me. “We’ve lived through the experience of having a great paper and losing it, and we do not want to let that happen again.” Thus the multifront drive for “sustaining” subscriptions, for a website with frequent updates—and a paywall (the historical items mentioned above are in a non-paywall section)—and for events like one this coming weekend, in which the former Boston Globe reporter Tina Cassidy will speak with Charles Sennott, also formerly of the Globe and now the head of the GroundTruth Project. (Sennott is also a founder, with Steven Waldman, of the ambitious new Report for America project, which I wrote about this past summer.)

What difference will that make? Robbins gave the example of the town’s decision last year on whether to spend nearly $50 million on elementary-school construction. “There was tremendous controversy and consternation,” he said. “The previous school was only 30 years old, and many people were upset. We did an incredibly good job of covering all aspects of the issues.”

I have read through many of the Press stories in issues leading up to the town-meeting vote last spring, and I agree. The trade-offs and implications involved in the budget choices were laid out with great clarity and care. An in-person vote of citizens at a town meeting would decide the issue. “Usually 300 or 400 people is the most you’d ever see at a meeting,” Robbins told me. But for the vote, in May of last year, nearly 1,100 people showed up—and approved the spending by the required two-thirds majority. “Of course I’m biased, but I think a lot of the outcome was due to the depth and scope of coverage we had in the paper,” Robbins said.

By email, I asked Charles Sennott whether, as a resident of the town, he agreed with this assessment. “Yes,” he wrote back, the paper “did exemplary work on its coverage of the big vote, truly small town New England newspapering at its very best.”

Is The Harvard Press‘s answer “the” answer for all struggling local papers? Of course not. It’s up to the people of Harvard, Mass., to see whether they can keep this model of journalism going even in their one community.

But it is one answer, for one town, and the moment, and in these times each such answer deserves attention.