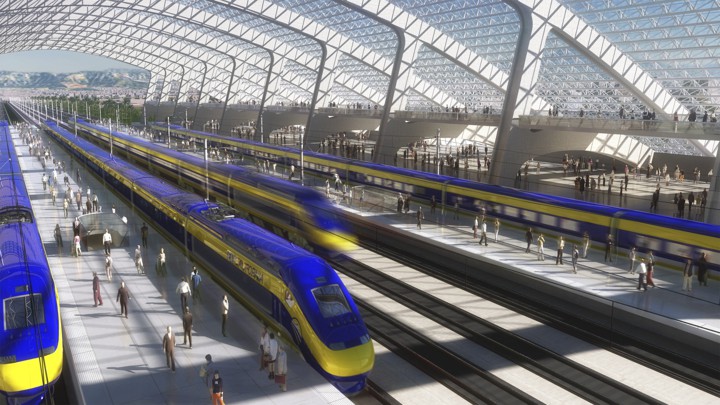 As a reminder, this is #7 in a series on the most ambitious and consequential infrastructure project now under consideration in our infrastructure-degraded land. It is the plan for a north-south California High-Speed Rail system, which had its genesis before Jerry Brown’s second coming as California’s governor but is now his signature project as he runs for re-election to an unprecedented fourth term. For previous installments see No. 1, No. 2, No. 3, No. 4, No. 5, and No. 6

The big HSR news of this past week was a ruling from a three-judge panel of California’s 3rd district court of appeals. Late on Thursday, the judges unanimously overturned a lower-court ruling that had prevented the HSR authority from selling bonds to begin construction of the system.

The issues in the case are, well, legalistic. For more about them you can check the thorough accounts from the LA Times, the San Jose Mercury News, KQED, and the Fresno Bee. The Bee’s and KQED reports have embedded versions of the full text of the ruling.

As all the stories make clear, the ruling does not end the legal problems for the high-speed rail program, nor the political controversy about it. But the appeals court decision was widely reported as a significant step forward for the project and a win for Governor Brown. E.g. this headline from the Mercury News:

And this summing up from the Fresno Bee:

The ruling represents the second legal victory in a week for the rail program at the appellate level. On July 24, a different three-judge panel from the 3rd District ruled in the rail authority’s favor and upheld [lower court judge] Kenny’s approval of an environmental impact report that selected the Pacheco Pass between Gilroy and Los Banos as the preferred corridor for high-speed trains between the Bay Area and the San Joaquin Valley. The San Francisco Peninsula communities of Atherton and Palo Alto had challenged Kenny’s approval of environmental work for the Bay Area-to-Central Valley section of the rail line.

For now, that is enough of the legalities. On to further reader discussion of the merits of the plan. First, from a reader in Southern California:

One of the arguments I keep running across is the idea that the High Speed train should run non-stop along the I-5 corridor instead of along the 99, which was only included to get legislators on board.

No, it runs along the 99 corridor to get passengers on board. There are a million people in the Fresno metro area, plus all the people in Bakersfield and a major seaport city in Stockton. Depending on how you count the borders, the San Joaquin Valley is home to nearly 4 million potential customers.

[JF note: see the Federal Highway Administration map of I-5 and Highway 99, at right. I-5 is in red and bypasses, to the west, most of the major cities of the San Joaquin Valley. Highway 99, shown in yellow, goes from city to city through the valley.]

And the San Joaquin Valley is in a natural cul-de-sac, cut off from the south by mountains and mired in a 19th century agricultural economy. One of the biggest benefits of the HSR project is reconnecting the Central Valley with SoCal to allow a modern economy to develop.

Asking the people of the Central Valley to drive to their destination to board the train is not going to improve the transportation options for the people who could be the key to profitable ridership.

And now, from a reader who was traveling in Europe as he sent the message. He responded a comment from a previous reader, who had said: “The difference of HSR in Europe and Asia to the US is the access to the stations: European cities were built around train stations: see Frankfurt, Hannover, London, Amsterdam.” This latest reader, Robert Mahnke, replies:

I don’t know why this sentence really bugged me, but perhaps it’s because it reflects a mistaken belief that we are doomed to live in poorly designed cities because it’s our birthright, rather than a choice we have made.

I am in Brussels, and arrived here by the Eurostar last night after spending several days at the St Pancras Renaissance Hotel in London, located on top of St Pancras station, so right now I am very much appreciating the planning decisions made around rail in Europe.

Of course, most European cities were *not* built around train stations. Londinium was the capital of Roman Britannia. Frankfurt, Hannover and Amsterdam all date from medieval times. Steam trains were a nineteenth- century innovation. To build train stations in these cities surely involved expensive, disruptive engineering projects. (Conversely, American cities like Denver, Phoenix and Tulsa *did* grow up around railroads.)

Amsterdam is an example. Amsterdam Centraal station was built in 1889. In his history of the city, the Dutch journalist Geert Mak laments the decision to build it essentially in the city’s harbor, blocking the city’s waterfront on the IJ. [JF note: I was in Amsterdam last week when I received this message; the IJ, pronounced roughly “eye,” is the lake/bay to the city’s north.] Since then, reclamation projects have filled in much of the IJ around the city, so modern maps make it hard to see what he means, but here is a 16th-century view of the city:

The perspective is from over the IJ — reflecting that Amsterdam’s trade was with the sea (and the Amstel River), not over the swampy land. If you look at a modern map (the IJ is to the north and west), you’ll see that the train station was built in the harbor, cutting off the city from the IJ:

So as Mak writes, it was a large and hard choice to put Amsterdam’s train station where it is.

Amsterdam Centraal is not at the center of downtown, surely because it would have been so disruptive to site it there. Typically, one doesn’t find train stations at the very center of cities. For older cities, it’s surely because the demolitions that would have been necessary didn’t make sense. So you find multiple rail stations at somewhat more peripheral locations, e.g., in London:

Much of the reason that it feels like some of these cities were built around the train stations is that later public transit serves them so well. When I go to Amsterdam, I can take HSR from Brussels or Cologne and get onto a tram, and if I then fly out of Schiphol, there’s a fast and convenient train from Amsterdam Centraal right into the airport terminal. When I landed at London Heathrow the other day, I got right on the Underground’s Piccadilly line and got off at St Pancras / Kings Cross station, and my hotel was next door. (And not every European city does it right. When I fly to Berlin, I have to take a cab from the airport. But getting it right is not a uniquely European phenomenon. You can take the El in Chicago right to an O’Hare terminal.)

It is possible to “retrofit” cities to make this work. The Silver Line didn’t exist when I last lived in Boston. I flew back and forth from SFO to Logan on a recent weekend to bring my kids to their grandparents. I got on a Silver Line bus a curbside, and it took me via dedicated lanes to South Station, where I got right on the Red Line to Cambridge. When I went back, it worked just as seamlessly.

California’s struggles with HSR make me wonder if our political system gives too much power to those who would block public-works projects. That said, I will also say that I have been in both Singapore and Beijing recently, and in both cities it seemed to me that the political system makes bad redevelopment too easy. Two cities apparently at opposite ends of the political spectrum, but both downtowns were full of massive projects which made no sense to a pedestrian at street level but might have looked great to someone arriving in a limousine.

Still to come in the series: some reader mail critical of the project, some other international and historical comparisons, and my own “this I believe!” explanation of why on balance I think this is an investment worth making and a risk worth taking for the state.