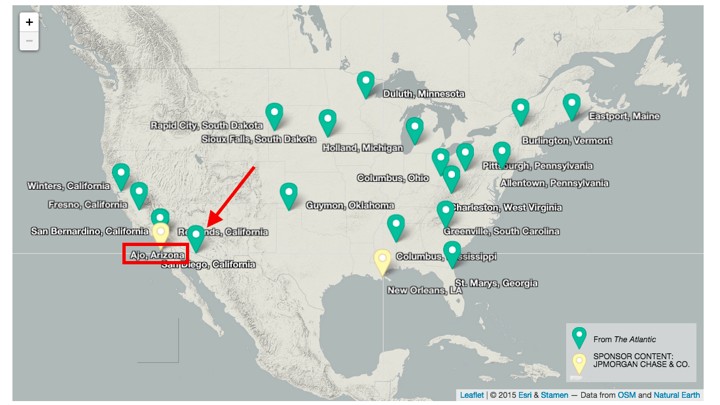 Having listened to people from around the U.S. talk to us for our American Futures adventure over the last 20 months, I can report that regionalisms of American English are still thriving.  Sure, there are some ubiquitous new Americanisms that we have all adopted from listening to the same national media, or moving and traveling around the country talking with each other. For example, the American English patterns like the “uptalk” of ending all sentences as though they’re a question, or the related up-stress on words in a series, like “I’ll have to stop at the store, and then the library, and then the cleaners, and the gas station…”

And yet, on the other hand, you’ll mostly hear a pile up of modals, like “might could” instead of might or could, in the South, especially Texas. The broad flat nasal you recognize from the movie Fargo still lives in, well, Fargo and nearby in the upper Midwest. And only in New Orleans will you hear the icebreaker question “Who’s your Mama?”

One other regionalism, or really town-ism, that I’ve been following is the set of words and phrases that people choose when they are describing their own towns. For certain towns, especially ones with a strong narrative that is shared among its residents, these sets of words can be remarkably consistent,  making it seem as though people are speaking from the same script. The words stand out for their frequency in conversation, often for their local flavor or uniqueness, or as common judgments, reflections, likes, and dislikes of the speakers. Most interestingly, when you bundle the words all together, they invariably tell a revealing story of the town.

That is the case in Ajo, a very small town in southwestern Arizona, just 40 miles shy of the border with Mexico. I’ve put together the words and phrases I heard during two visits to Ajo, which involved many conversations with dozens of people from newspaper editors to teachers to retirees, students, community activists, artists, and also from Ajo lifers to newly-arrived snowbirds. Then I generated a “word cloud” from those words, which you see below. What follows is the story that this word cloud tells me about Ajo, with words that show up in the cloud being mentioned in italics.

Ajo was and is a tri-national town. Its residents are Native Americans  from the Tohono O’odham tribe; Hispanics mostly from Mexico; and white people, who have lived in Ajo for a long or short time. The three populations lived more separately a century ago, when the engine of the town, the New Cornelia copper mine, built separate housing areas for each: Mexican Town, Indian Village, and the rest of town for the white people. The first two were demolished after the mine closed in the 1980s. The three nationalities live in closer quarters now, go to school together, and have intermarried.

I heard reference to the Tohono O’dham, also called either Tohono or O’odham for short, dozens of times a day. We loved listening to KOHN, the “Voice of the Tohono O’odham Nation,” out of Sells, Arizona,  for its jazz polka and curiously interesting live-broadcast of tribal meetings. The tribe changed its name from the Papago to Tohono O’odham in 1986; the name means Desert People. One tribal elder we met with told me that most native English speakers mispronounce Tohono, stressing the second syllable /ho/ instead of the initial syllable /to/. There is also an issue with O’odham. The /’/ is a glottal stop, the sound you can make before an initial vowel, as in “up”  or “uh-oh”. Most people find it easier to skip the glottal stop and pronounce  O’odham with a long /oh/ sound.

As a town of about 2500, which swells to about 4000 in the winter, Ajo makes lots of references to the clusters of residents who come and go, or who just come and stay. There are the various newcomers, like the survivalists, the artists, the retirees, and the sunbirds. Another prominent group is the border patrol, many of whom live in Ajo. They are obvious for their headquarters along the road to Why, Arizona, about 10 miles outside of Ajo; for their controversial government-built housing in Ajo; and for their many, imposing vehicles. If you don’t live along the border, you probably don’t have much use for saying “Border Patrol,” but if you live in Ajo, they are much on your minds and lips.

The rise and demise of Ajo throughout the 20th century has a constant and permanent physical reminder in the form of the now-closed New Cornelia copper mine, and its 7.4 cubic billion feet of tailings, which is visible from space! (Contrary to public opinion, the Great Wall of China is not visible from space. And for good measure, frogs will not survive a slow boil.)

There are lots of words around this heritage that I heard repeatedly: the mine,copper, tailings, Indian Village, Mexican Town, Greenway (from the mine owner, John Greenway), and The Curley School (a showpiece in town, built for miners’ children in 1919).

Our Sense of Place

Ajo is dominated by its place in the middle of the Sonoran Desert. Everyone feels it; everyone talks about it. The desert is dramatic and often harsh, and it dominates life.  It is enticing and sometimes dangerous. Outlaws traverse the desert; illegals and traffickers hide there; and while some people set water out for them, others report them. The older schoolkids in Ajo use the desert as a playground, for driving their quads and, like athletes in town, for biking or hiking. Retirees picnic in the desert or gather to watch the sun go down. Some lone campers live there in their motor homes.

The desert is spectacularly beautiful, hot, and remote. FDR declared a vast swath of the Sonoran Desert as The Organ PipeNational Monument in 1937. Everyone can distinguish a saguaro from an organ pipe cactus, and spotting javelinas is a local pastime.

After the mine closed in 1985, Ajo has rebounded in large part through work of the International Sonoran Desert Alliance  (ISDA), with it push to rehabilitate the beautiful main town plaza, the Curley School campus, and to make the arts, including desert gardening, a centerpiece for the town activities. Shops and restaurants like 100 Estrella and The Oasis, and the increasingly popular Saturday Market are booming, attracting a grateful and loyal clientele among locals and tourists alike. The local IGA supermarket, called simply the store, is a general point of reference for the town, as well as being the one place to shop for groceries and a gathering spot and employer for high schoolers. One after another, retirees visit and then put down roots in Ajo, many as artists.  Some sell their art; others paint murals, which are becoming a feature of the town.

Finally, the name of Ajo itself. It is tempting to assume that Ajo the town is named for ajo, the Spanish word for garlic. But, sadly, that is likely a folk etymology. It’s probably more accurate to say that the Spanish picked up on Ajo, a word they knew, because it sounded like the Tohono O’odham word o’ohon, which means “paint”. The tribe used the local soil  to capture its red pigment.